Words or Pictures – How Do YOU Think?

Did you ever stop to think about how you think? Are there images that come together in your mind as you go through the day, or do you narrate your life, choosing just the right words as you walk down the stairs or eat your breakfast? Most people think in both words and images, but when pressed they will say that one kind of thought directs the other.

We took an informal survey of friends and family and asked them which method dominates the way they think. Of the 33 people we heard from, thirteen responded “pictures,” fifteen responded “words,” five said “both” and one said neither – he thinks in abstract concepts that he must work hard to translate into either pictures or words.

Professor Temple Grandin of the University of Colorado raised awareness of visual thinking when she wrote her book, Thinking in Pictures. A woman with autism who has made a career out of designing farm structures that are sensitive to an animal’s point of view, Grandin is on the more extreme end of visual thinking. Over the years she has had to learn to translate the images in her mind into words, which sometimes makes conversation difficult for her.

Even though people on the autism spectrum and those with dyslexia are much more likely to think visually, the truth is that 60-65% of all people are visual thinkers. They are often artists, designers, architects and engineers who make good use of their ability to visualize their thoughts and turn them into objects, machines and structures that are beautiful and useful. They give those of us who think in words that many more things to wonder at and write about, and make us envy their ability to create what we can only describe. 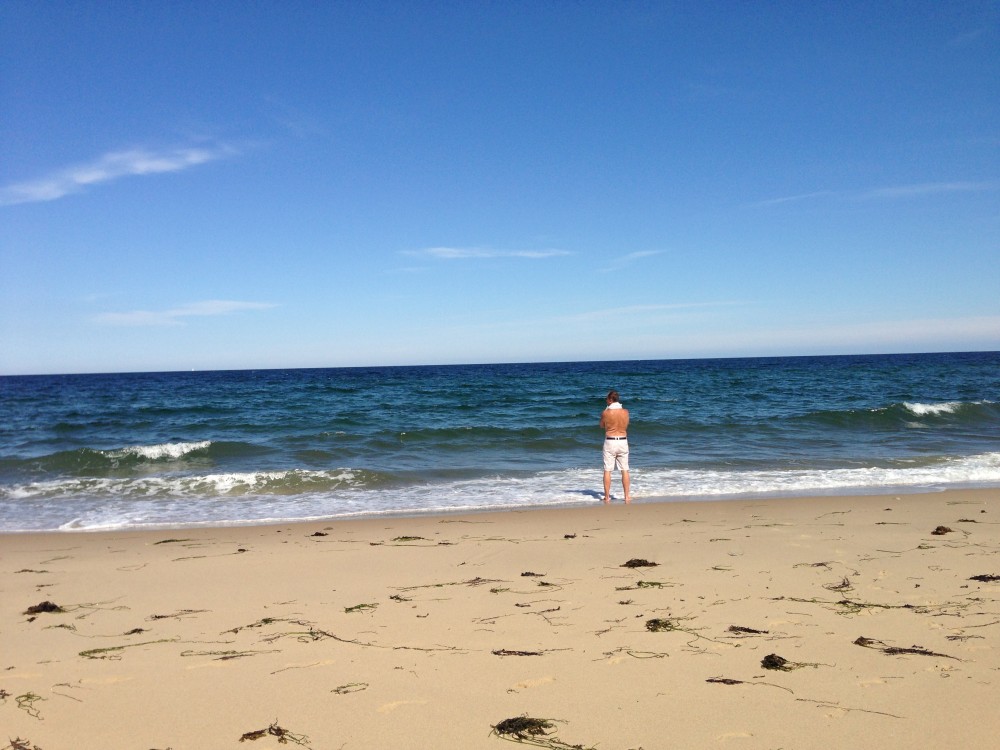 The word thinker sees the image above, listens, and composes in her head:

It was one of the last warm days of summer. He removed his shirt, put it around his neck and stood at the water’s edge, squinting at a sailboat on the horizon. “I’ve been so many incredible places,” he said. “But none of them are any more beautiful than this.”

The visual thinker sees something like this (only bigger):

Because our poll was directed at people we know, we thought we might be able to predict who the picture thinkers are and who the word thinkers are. It turns out that we were right about the artists and those that we know write for a living – the writers all think in words and the artists all think in pictures – with one noting that she thinks in pictures “not only primarily, but also secondarily.” Not surprisingly, those who are both writers and illustrators were compelled to tell us they think in words first but that the pictures are quick to take shape around the words in their minds. Scientists and engineers tended to be visual thinkers but we didn’t score quite as well in predicting what those folks would say – they dominate the “both” category.

Some people (but none in our poll) also think in numbers. Daniel Tammet is a young man with autism who has built his life around his ability to think in numbers, and is most famous for his March 2004 recitation of the value of pi to 22,514 decimal places (it took 5 hours and 9 minutes). While that ability is certainly rare, many people have his penchant for assigning colors and emotions to certain numbers or letters, called synesthesia. For example, to Tammet, nine is tall, round and blue.

From a parenting perspective, we learned from Grandin’s book that understanding how our children think also tells us a lot about how they learn. Our child who thinks in words likes things explained that way – she likes dialogue. Our child who thinks in pictures is quickly bored or overwhelmed by long explanations and conversations – he wants to be shown what we mean.

So maybe the next time you are riding on the car or lingering over dinner, you can throw out the question: how do you think?

Are you fast at coming up with words when given a handful of letters?  Try our new card game that both adults and children can play, where you get more points for thinking about words that use up all your cards.  It’s a bit like the popular word game by Hasbro/Parker Brothers (registered trademark of Hasbro, Inc.), but uses cards instead of tiles and does not require a game board.  It’s loads of fun — try it out for yourself: