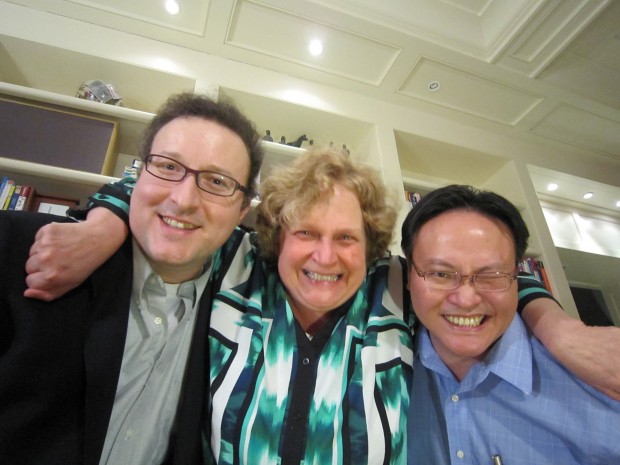 We are so proud of out Tumblehome team! On April 8, the Gordon and Betty Moore Foundation and Society for Science & the Public (SSP) announced winners of the Science, Play and Research Kit (SPARK) Competition, and awards in two categories went to our awesome Tumblehome team: Barnas Monteith, Penny Noyce, and Peter Wong.

The SPARK competition is “ a challenge to reimagine the chemistry set for the 21st century.” Winners were selected in two categories: prototypes – projects that are operational and demonstrable – and ideations – fleshed out project ideas that have not yet been developed into prototypes, but have a strong potential for development.

According to the Moore Foundation press release that announced the winners, “the SPARK Competition focused on science beyond chemistry, challenging the nation’s most creative minds to develop projects and ideas that will encourage imagination and interest in science and technology, inspiring today’s children – often through immersive play and learning through doing – much as the classic chemistry kit inspired earlier generations to learn, explore and discover. Many of today’s scientific innovators – including Moore Foundation and Intel co- founder Gordon Moore – attribute their early fascination with science to their childhood chemistry sets. Yet, the chemicals in these classic sets are now illegal and replacement sets often lack elements of excitement and wonder. The competition sought to elicit new catalysts that could foster the persistent curiosity and creativity that lead to longer term engagement in science and engineering, as well as to put a spotlight on the importance of experiences that ensue from unscripted exploration and tinkering.”

When they learned about the competition, the Tumblehome team scrambled to flesh out ideas they had been mulling over for some time. In the two weeks after Christmas, Barnas and Peter developed a working prototype of a simple multisensory that offers multiple forms of output: sound, colored lights, numbers and graphs. “We wanted to get kids exploring using sensors,” Barnas explains, “and we wanted to start with an intuitive form of output: changing sounds or colored lights.”

The Tumblehome SenSay Sensor System won third place in the prototype category. SenSay provides a modular all-in-one sensor and exploration kit with online supports. The kit lets explorers experiment with physics, environmental energy, biology, chemistry and engineering design without having to solder parts together or use a pre-existing bulky microcontroller. The sensor allows users to gather data, provides output on a computer, and gets immediate feedback through sound, light, and graphs. The SenSay system provides a novel way to get kids interested and engaged in data gathering and analysis. Further developing the prototype will be a priority for the Tumblehome team.

In the ideation category, which is for ideas not yet prototyped, Tumblehome won the $2,500 second prize for another component of the SenSay project, a concept for SenSay Sustainable Villages©. “If developed, the project will allow young people to design and build model solutions to universal problems of human settlement, including shelter, heat and insulation, lighting, solar and wind power, pumping and purifying water, growing plants with irrigation or hydroponics, and managing a pond or aquarium. Users would experiment both virtually and in the real world, where they will use sensors and other components of the SenSay Sensor System to model solutions to challenges.” Tumblehome Learning plans to collaborate with the Concord Consortium to develop the Sustainable Villages idea.

“As a whole, these winners conveyed an exciting variety of ways to get kids hooked on science and engineering,” said Paul Gray, PhD, interim president of the Moore Foundation. “We need these different entry points to cultivate a long-term interest in exploring science and technology.”