May Day: Exploring the Tradition of May Baskets

Spring is late this year in New England and it is cold and rainy today. But May Day is May Day, and we want to at least think about celebrating!

When we were growing up in the Midwest, we filled paper cups with popcorn and candy and put them on the front steps of our friends’ houses. Then we rang the doorbell and ran away, sometimes watching from afar to see who answered the door. The tradition was supposed to be that if you caught the person who left the basket they had to give you a kiss, but everyone we knew took the candy and ran back inside the house! It was a sweet ritual of spring that has origins in Roman times, when it was the Festival of Flora, the goddess of flowers. Over the centuries many cultures have co-opted May Day for other celebrations, and while all of them include a maypole, some of them are decidedly less than sweet.

Germany has Walpurgisnacht, a remembrance of Saint Walburga, who helped Saint Boniface bring Christianity to Germany in the 8th Century. Walpurgisnacht also became synonymous with the anti-withcraft rites immortalized in Goethe’s Faust. Still, the May basket has some roots in German tradition as it was also the time that ladies would secretly place roses or rice in the shape of a heart at the doorstep of their beloved.

Medieval England celebrated greening of spring and featured dancing around the maypole and morris dancing, in which dancers (often dressed as Robin Hood, Maid Marian and friends) and a piper travel from town to town with a troop of six more dancers in two rows of three. Banned by the puritans at one pint, May Day returned to England in the 1600s with and the profusion of flowers, dancing, and weaving ribbons attached to the Maypole.

Ireland’s pagan version was Beltane, which translates loosely as “fire” and is used as an excuse to celebrate and/or exorcise pretty much everything. The fire ritual involves extinguishing all fires the night before and then relighting the Beltane fire on May 1. There was also a ritual in which cakes were broken into several pieces, one of which was blackened. Celebrants chose pieces of cake blindly and whoever got the blackened piece was subjected to a mock execution. Also on the schedule: burning witches in effigy, crop blessing, fertility rites, snake dancing and “bathing faces in morning dew to retain their youthful beauty.”

In modern times more than 80 nations recognize May 1 as Labor Day, declaring it International Workers Day to mark the 1886 fight for the 8-hour work day.

Even though modern lifestyles don’t really support the practice of leaving things on people’s doorstep anymore, we like the idea of reviving the tradition of remembering special people with flowers and sweets on a spring day. We all know someone who might be in need of a May day boost – a grandparent, neighbor, friend, or teacher whom we can present with a small surprise that lets them know we are thinking of them. So we sorted through our craft and gardening things and came up with a few version of a 21st century May Basket. We went to the nursery and got the smallest flats of flowers we could find, some peat pots, and some soil, and went to work. Here’s what we came up with: 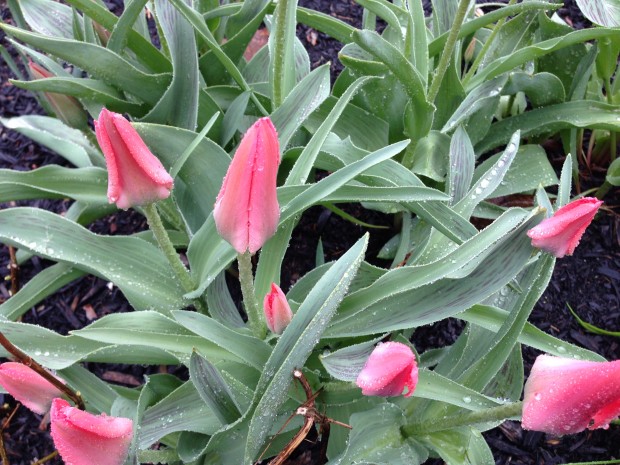 The April showers have spilled over into May Day in 2014.