THL’s Something Stinks named an Outstanding Science Trade Book for 2014! 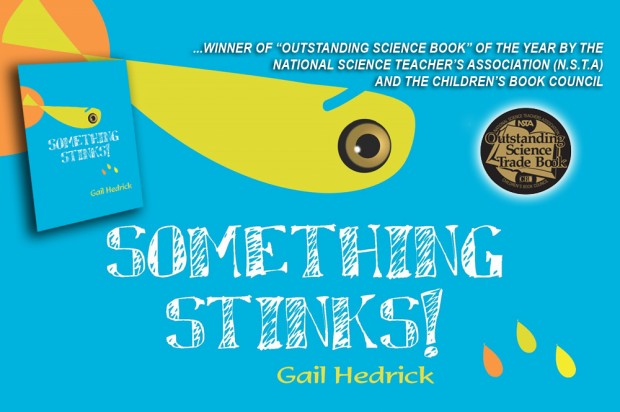 We at THL are thrilled to report that The National Science Teachers Association and Children’s Book Council’s (NSTA-CBC) Outstanding Science Committee selected THL’s Something Stinks for its list of 2014 Outstanding Science Trade Books for K-12. Yesterday, November 7th, 2013, NSTA presented this year’s selected titles at the NSTA conference in the Charlotte Convention Center.

As we outlined in our profile of author Gail Hedrick last April, Something Stinks is a fast-moving tale of pollution and detection.  Dead fish are washing ashore on the Higdon River, and seventh grader Emily Sanders wants to find out why. Mocked by fellow students and abandoned by her best friend, Emily investigates farms, a golf course, and local factories. Gradually she persuades friends to help her test the waters. Their investigations lead them into trouble with the law and confrontation with the town’s most powerful citizen.  Can a handful of determined seventh graders find out the true source of the stink in the Higdon River?

“Environmental stewardship is a common topic of concern to students in grades 5-8,” says THL co-founder Pendred Noyce. “Emily is an reluctant science student until her investigation introduces her to the science practices of persistence, skepticism, experimentation and discourse.” 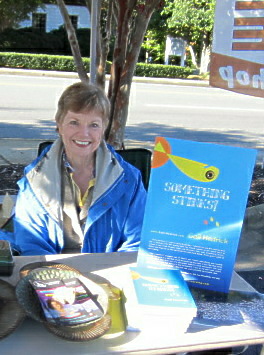 Gail Hedrick, author of “Something Stinks” at a book signing.

Gail Hedrick is a former physical education teacher who writes on fitness and etiquette as well as writing how-to’s and middle grade mysteries. She grew upon a lake in Michigan, spent many years beside rivers in Virginia and North Carolina, and now lives in Florida. Something Stinks is her first science book. “I grew up experiencing pristine freshwater lakes and rivers. I hoped that would be the same for our children. Then, fish began to die in the rivers, and I couldn’t understand why people weren’t more concerned. I bet kids would be, and that’s where ‘Stinks’ began.”

In the months since the books release last spring, Hedrick has had a few chances to visit classrooms to get a first hand look at how kids respond to her book. When she heard about the NSTL’s recognition earlier this week, she told us, “The award is icing on the cake, but being in the classrooms, hearing the kids’ comments and questions was so amazing, and put a face and validation of why I write. I’ve held my breath ever since the book was published wondering if kids would like it, and they really seemed to, so I just smile thinking about it.”

If you haven’t had a chance to read it, pop over to the Something Stinks page and order a copy!