The Egregious Case of the Excess Eggshell

The Egregious Case of the Excess Eggshell

…Would be the title of a great new GAS series book (if you’re not familiar with our GAS titles, you can check it out via the menu tab above) – however, for now, that’s just the title of this blog about diseased dinosaur eggshells. 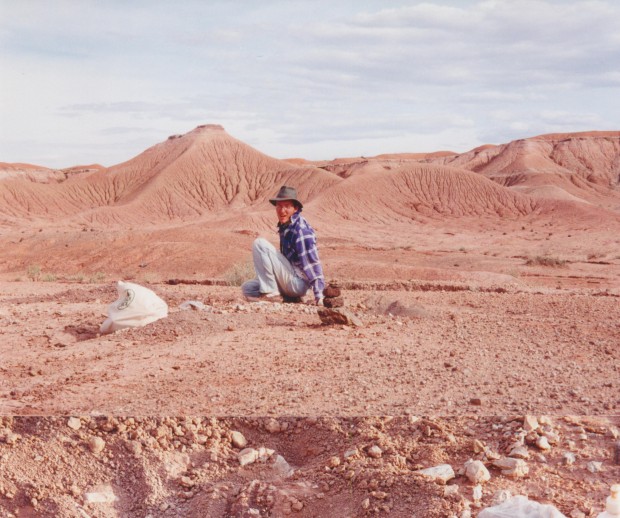 Author & blog writer Barnas Monteith, on the search for phytosaur eggs in the Arizona deserts — looking quite exhausted here.

Every now and then we read a story about animals becoming endangered due to pollution in their environment.  There have been stories not too long ago about bird eggshells (various rare eagles, hawks and owls) becoming particularly thin due to DDT and other pesticides in the environment.  Since eggs serve the purpose of protecting young animals, thin eggshells can be extremely dangerous as they may cause premature hatching, or may allow bacteria to enter into the embryo, or other problems.  However, there have been cases when eggshells have also become too thick.   In this case, the babies may use up all their strength in order to hatch from the egg, leaving them vulnerable to predators, or worse — they might even suffocate.  In fact, according to the fossil record, a number of dinosaurs died this way.

Eggshells are structured to be strong enough to sit on or be buried under dirt, but yet with pores to allow air inside, which are small enough not to let liquid nutrients out, and also protect against outside infection.  They do this because of a unique structure, which can be seen in the cross section of eggshells (below). 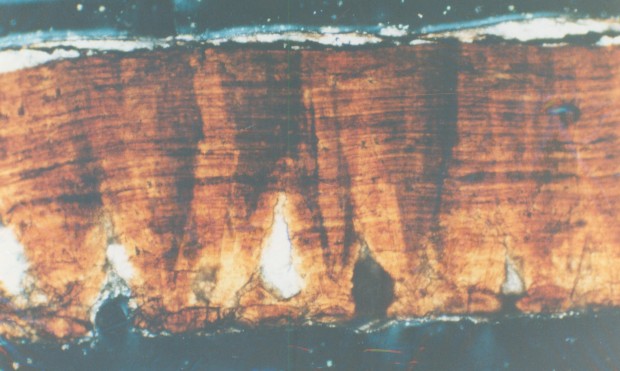 Note the very distinct patterns (called microstructures) of a typical dinosaur eggshell (this one happens to be a Maiasaura).  These patterns are normally U-shaped structures which make up the base of the eggshell layer.  Compare the following picture to the above picture to see microstructural patterns that are typical of most single-layered eggshells. 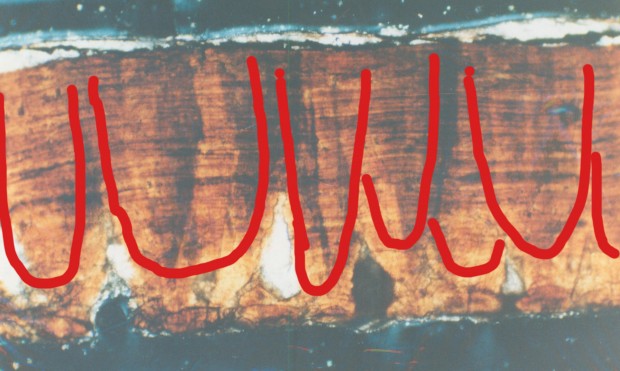 For several decades now, scientists have been stumped about certain exceedingly-thick fossilized eggshells that were found in the Cretaceous period of France, belonging to a group of dinosaurs known as sauropods.  Sauropods were the giant herbivores that most people think of, when they think about dinosaurs – like apatasaurus, brachiosaurus, diplodocus, etc..  These particular mysterious eggs were from a type of dinosaur known as Hypselosaurs.  Hypselosaurs are featured in Barnas Monteith’s new book Dinosaur Eggs & Blue Ribbons, in the chapter about his work with UColorado fossil eggshell expert Karl Hirsch. 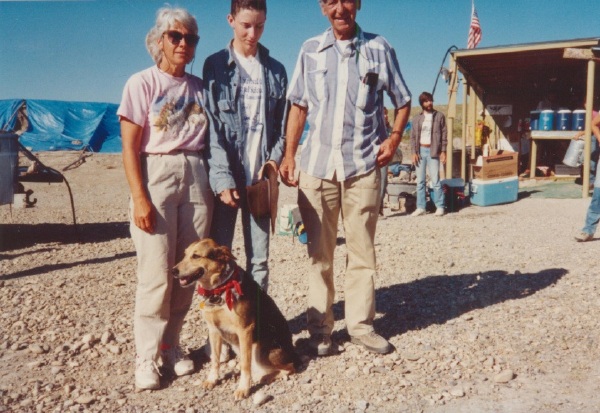 Barnas, as a youngster, alongside eggshell researchers Betty Quinn, Karl Hirsch and his dog Maggie, at Egg Mountain, Montana – this picture is featured in the book Dinosaur Eggs & Blue Ribbons.

It is possible that this group of Hypselosaurs may have died and gone extinct due to a “pathology” or disease involving their eggs, in which multiple layers of eggshell formed on top of each other (and in other cases, were exceedingly thin).

Barnas, compared to a Sauropod skeleton, and a normal sized sauropod egg

As you can see here, Barnas is standing next to an actual egg from a Hypselosaur at a museum, from the photo above.  Note that it’s actually not very big considering how large of an animal this egg will someday become. 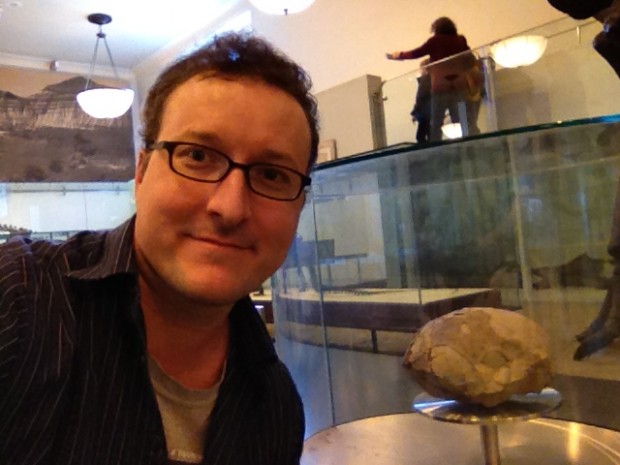 When you look at the difference between a normal sauropod eggshell and a pathologic one, with too many layers, it is quite striking.  It’s hard to believe that a dinosaur inside this egg (below) could have survived. 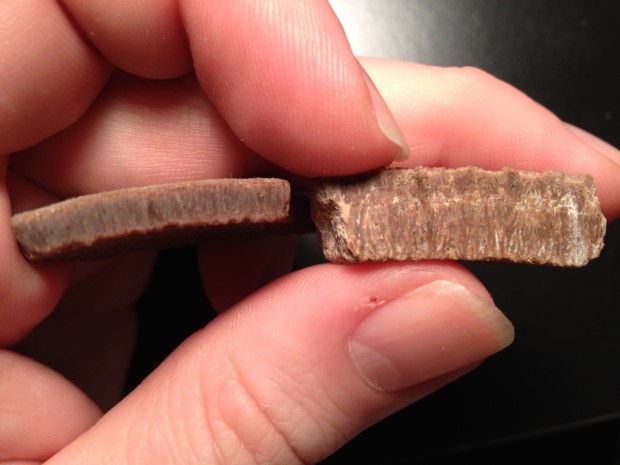 Normal sauropod eggshell (left) compared to pathologic multi-layered eggshell (right).  These are from the same species of dinosaur, found during an expedition within the same locality.

For comparison of thickness, here is the above dinosaur eggshell compared to a chicken eggshell. 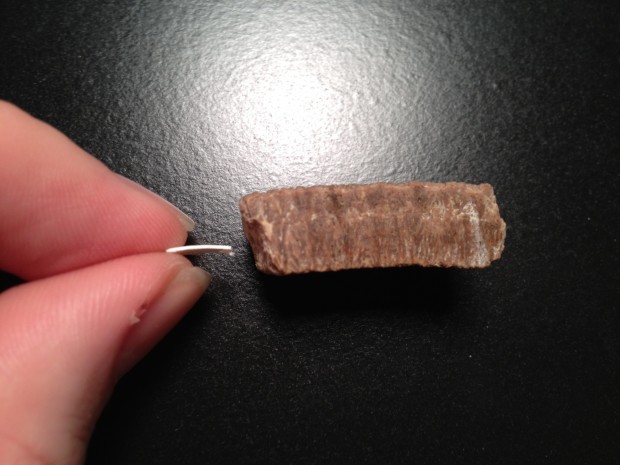 Now see a section of these super-thick dinosaur eggshells via a microscope (this picture is from a simple microscope that we made ourselves – a fun activity to do at home). 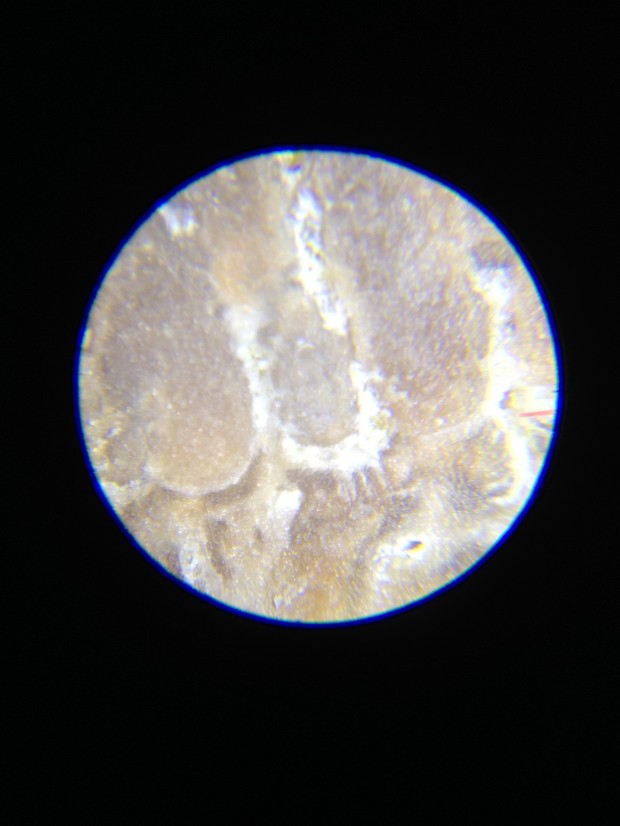 For comparison, see this same section, annotated with the microstructure patterns.  The top layer “suffocates” the bottom layer, not allowing any room for air to be exchanged.  It is likely that any dinosaur embryo within this egg would have died long before being able to hatch.

In the near future, as mentioned above, we will post a blog showing you how to make your very own, low cost microscrope so you can take pictures just like this with your smartphone or webcam too!

There have been many theories on the extinction of dinosaurs, though eggshell pathology isn’t really a major one.  However, in some places, including “Egg Mountain” in Montana, and in Heyuan, China (which holds the Guinness Book of World Records record for the most fossil eggs in the world), there are mass burials of eggs.  In fact, in this one location of Heyuan, located within Guangdong, there have been over 17,000 eggs found since 1996.  As of just last week, they’re still finding lots more!  The dinosaur eggs here are literally falling out of the dirt walls, at some construction sites:

While scientists still don’t have a clear answer for why this mass eggshell pathology occurred, this particular species of dinosaur seems to have died out not long after the disease happened.  ”Eggshell health” plays an important part in indicating the population health of egg-laying animals.  So, it’s important to recognize when certain types of bird and other egg-laying animals are in danger due to pathologic eggs caused by pollution, and fix the situation as quickly as possible.  Otherwise, those animals will end up just like the dinosaurs… long extinct!