The Buzz About Bees: A Tumblehome Quiz

Summer’s fast approaching and the pollinators are out in full force. Test your knowledge with our bee quiz (scroll down for answers)!

2. Bees pollinate the vast majority of food crops. Which of these crops is NOT pollinated by bees or insects?

3. True or false? Honeybees are not a native species of the U.S.

4. The collapse of honeybee colonies has become a serious concern in recent years. What do scientists think is causing bee colonies to die suddenly? 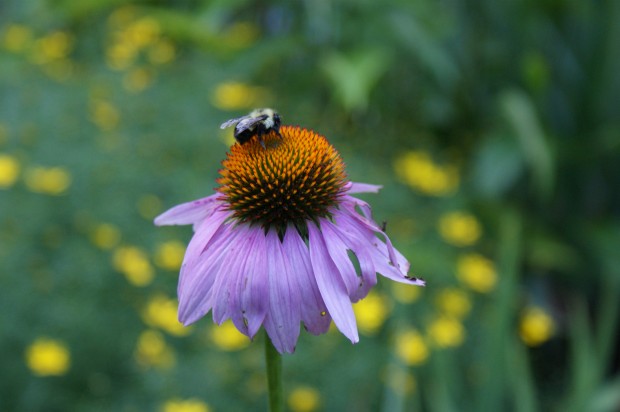 5. How many species of bees are there on Earth?

6. It can be easy to confuse honey bees with bumble bees. Bumble bees are often thought of as large, fuzzy bees that”bumble” about, but they actually come in many sizes. Honey bees are more uniform in size, less hair, and have the more distinct gold and white striped associated with bees. One of the more important distinctions between these two types of bees is their stingers. What is it?

7. If you find a bee hive in your yard, what should you do?

8. True or false? Africanized Honey Bees (AHB) are called “killer bees” because they seek out people and attack them.

9. What’s the first thing you should do if you are stung by a bee?

1. True. The efficient development of the hive, building of the honeycomb and the division of labor among the three types of bees (queen, works, drones) all illustrated for Darwin how bees refined their environment and practices across generations to ensure their survival.

2. A. Wheat is largely self-pollinated, and pollination and fertilization often already occur even before the the flower is fully open.

3. True. Honeybees were brought to the New World from Europe both for their honey and to supplement wild pollinators for large crops. Native pollinators like wasps, hummingbirds, butterflies, bats and flies tend to be solitary and only in need of a small amount of nectar. They also tend to pollinate only specific kinds of native plants and not some imported crops like tomatoes and cucumbers. Honeybees, however, come in great numbers that will take nectar from most of the plants it comes across, which makes them ideal to assisting wild species pollinating large crops of diverse species. A recent study showed, however, that honeybees cannot make up for the loss of wild pollinators when their native habitats are destroyed.

4. E. While everyone agrees that bee populations are suffering, no single cause has emerged. Scientists hypothesize that pesticides and viruses are probably contributing to declining honeybee numbers, but a February 2013 study also revealed that climate and habitat changes over the last 120  years have destroyed many species of wild pollinators.

7. C. While it is sometimes fine to leave a hive alone if it is far removed people, it is always good to consult an expert when dealing with bees. If you have honeybees, contact a local bee keeper as those bees are increasingly endangered and might safely be moved to a safer location where they can thrive. If you aren’t sure what kind of bees you have, (carefully) take a photo and show it to a licensed beekeeper. To find a license beekeeper in your state, contact your local Department of Agriculture.

8. False. Africanized Honey Bees are hybrids of African honey bees brought to Brazil in 1956 and honey bees originally brought to the New World by Europeans. While they are much more aggressive than ordinary honey bees, they attack only when disturbed in their hives by loud noises, vibrations or other kinds of intrusions. They are not employed to pollinate commercial crops and at this time can only be found in the Southwest corner of the United States. While their stings have no more venom than a typical honey bee, AHBs are likely to sting in greater numbers and will pursue intruders over greater distances than other honey bees.

9. C. Removing the stinger carefully with your fingernail will stop the release of venom into your skin. Pressing hard on the wound when the stinger is still embedded will increase both the pain and the amount of venom you’re exposed to. A little swelling and itching at the site of the sting is normal, but if you’ve never been stung before, watch carefully for signs of a severe reaction, including:

If any of these things occur, seek medical attention immediately.