Why are invertebrates, and in particular snails, useful in evolution studies? 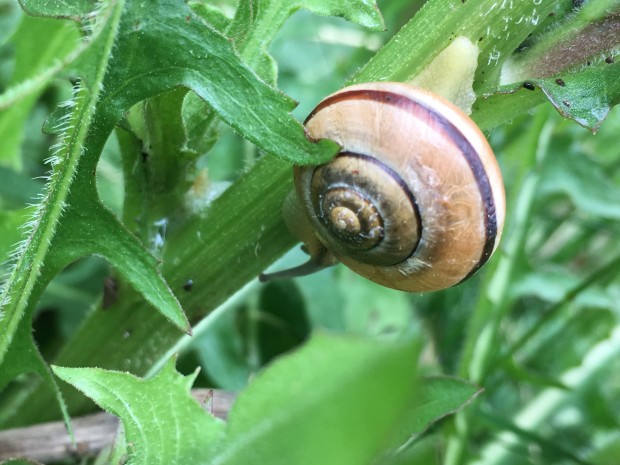 Picture of a snail, that I took while walking around my neighborhood recently.

Children around the world love their dinosaurs. Most know that they lived a long time ago – tens of millions of years ago, and then became extinct. Many know that the world was then taken over by mammals, and ultimately primates like gorillas and chimpanzees evolved into humans. It’s a simple narrative, and it helps children in some small way understand a bit about evolution, extinction and natural selection. However, while dinosaurs and great apes are cool and fascinating animals, they are actually not so useful in terms of the study of evolution in modern times, compared to invertebrates. The thing is that while you can find vertebrates like dinosaurs and sometimes human ancestors in museums around the world, there really aren’t many vertebrate fossils available in the geological record, relatively speaking. Looking just at insects, there are 10 quintillion insects alive on Earth today, representing ~91,000 species. Humans, on the other hand, are represented by just over 7 billion individuals today, with maybe just under 20 different species of human ancestors in the fossil record over the past few million years – with some species known only from a handful of fossils. That means there are over 1,000,000,000 times more insects than humans in the world. Other invertebrates, like mollusks (snails, clams, etc.) also outnumber humans by a huge amount; there are around 85,000 known species of mollusks (around 50,000 alive today; the rest are in the fossil record). And the huge biomass of mollusks is pretty obvious when you walk along any beach - there are seashells everywhere you walk – with layers and layers of shells beneath the sand as well.

When studying evolution, or really most things in science, you can generally get better experimental results when you have larger volumes of data to work with. So, when researching something like the finer aspects of evolution (e.g. genetic revolutions / punctuated equilibrium), you can do a far more detailed study when you look at animal (or plant) groups where there are a large amount of individuals and species available – preferably both extant (alive today) and extinct. Mollusks are great representatives in the fossil record because while their soft parts usually disintegrate quickly, their calcium carbonate shells fossilize well, and they are pretty much ubiquitous – they’re found nearly everywhere on Earth. That means you can get pretty detailed information on the animals in a particular ecosystem today, and compare it to an ecosystem thousands, millions or even hundreds of millions of years ago.

Another thing that makes mollusks appealing to use in evolution research is that while you can find loads of snails and clams in the ocean, you can also find them on land as well. The ocean is gigantic, and occupies most of our planet (71% of the surface of the Earth is ocean). The various seas of the world are connected, and as such, you can sometimes find a huge geographic distribution of certain mollusk species — meaning, you have a lot of ground to cover, to study them. In one sense, this can be very useful when trying to match up sedimentary rock layers, or when trying to date rocks (because buying flowers and chocolates usually doesn’t do the trick, when attempting to date rocks). You can use a very widely distributed type of clam or snail species (the best ones are those that as a species had a short lifespan in geological history) to identify a certain age of rock across a very large area – even across the planet. This means that a species was succesful and did not need much regional adaption – and could easily migrate around the world’s oceans. On the other hand, some terrestrial snails (land based), who may live only in a certain region, may not be able to travel very far from home, and can evolve very specialized species in a relatively small area (say, a particular swamp, or damp field, or pond). This helps to demonstrate that evolution can occur on a small scale, as a very small ecosystem changes over time, and the local snails may have no choice but to adapt or face extinction. This is effectively how Charles Darwin was able to study and describe evolution so clearly, based on his research in the Galapagos Islands. The Galapagos Islands have a number of highly unique terrestrial animals that are found nowhere else in the world. Animals on a highly remote island are really no different from snails locked into a small ecosystem (essentially an isolated area that acts as island from which the snails can’t escape). These isolated areas effectively prevent animals from moving away when ecological conditions change – ”forcing” animals to evolve, sometimes with highly unique adaptations, in a short period of time.

Here is a video I made in Bermuda about this very concept, some time ago, showing the various types of snails that Stephen Jay Gould studied, when he came up with the idea of Punctuated Equilibrium (jointly with Niles Eldredge). Back when I did research at the Harvard Museum of Comparative Zoology, I had the pleasure of meeting with him and chatting about snails (and the Red Sox), though he unfortunately passed away not long after. In the case of the Bermuda land snails (known as Poecilozonites, an incredibly successful and highly adapted indigenous genus of 4 species of snails was wiped out within the last century due to the introduction of predatory snails, as well as European garden snails, some of which were relatively similar to the one at the top of the page (although it seems that the Poecilozonites bermudensis, one species thought to be extinct for 40 years, may have been rediscovered in an alleyway in Hamilton, Bermuda within recent years and may be able to recover).


Snails have been fascinating paleontologists/scientists for a very long time. At the turn of the last century, my great- great grandfather Olof Nylander (the regionally well known naturalist/paleontologist behind the Nylander Museum of Natural History in Caribou, Maine) set out to document the distribution of freshwater snails throughout Northern Maine (while searching for invertebrate fossils) and in the process of doing so, discovered and named a number of snail species. Some of these species were so rare that they disappeared for decades after he first discovered them (and have also gone missing for decades between several re-discoveries over the past century). Below is a picture of a snail very closely related to the one named after Olof  - Vertigo nylanderi (the “Deep-Throated Vertigo”). It’s so tiny, you’d probably miss it unless you were using a magnifying lens (they’re only 1.5-3mm). It is thought that there are still many snail species that have not yet been discovered and named throughout the world — and many more which are thought to be extinct but may actually be lurking under a blade of grass in a remote pond somewhere, or maybe just sitting right there on top of a leaf in a bush at the city park.

Next time you go outside, pay attention to these small creatures crawling around on damp vegetation — you may just rediscover a long lost species, or discover a newly evolved snail species yourself!

If you’d like to read more cool stuff about the science of evolution, Tumblehome Learning has a number of great middle-grade books to choose from, including the following:

> The Furious Case of the Fraudulent Fossil – an adventure/mystery story about dinosaur to bird evolution, and covers some of the history of paleontology

> The Walking Fish – an exciting tale of a middle school aged child who discovers a fish which has evolved the ability to walk, after being isolated in a cave for many generations

> Dinosaur Eggs & Blue Ribbons – a biographical look at a succesful science fair participant who won various international science awards, and held a number of science fair records, with a project on the study of evolution using the biochemistry and microscopic morphology of eggshells

Of if you’re looking for something more hands-on, try one of Tumblehome Learning’s hottest products – our dinosaur excavation kits: