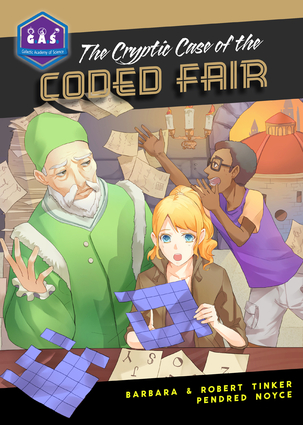 The Cryptic Case of the Coded Fair – Book

The Evil Dr. G and his companions are using coded messages in a plot to corrupt the International Science Fair. Quarkum Phonon, a Galactic Academy of Science Dude from the future, calls on four modern-day middle school students for help in solving these super-difficult secret codes & cyphers.  But will they break Dr. G’s code in time to save the science fair – and perhaps the world from certain destruction?

The Cryptic Case of the Coded Fair

With time travel and mysteries that need solving, the Galactic Academy of Science (G.A.S.) series instructs readers on how to think like scientists. Under the guidance of a Dude or Dudette from the future, the middle school characters are faced with treacherous, present-day crimes that require a historical knowledge of science in order to be solved. From investigating problems to analyzing data and constructing explanations and solutions, this series blends elements of sci-fi with educational methods that distill the key thinking habits of scientists and engineers. Learn to create and crack codes in this latest G.A.S. installment Dr. G and his companions are using coded messages in a plot to corrupt the International Science Fair. Quarkum Phonon, a Dude from the future, calls on four middle school students for help. Benson and Anita work on their computers while two new G.A.S. recruits, Ella and Shomari, travel through time, facing kidnappers, thieves, and spies in their scramble to learn about codes and ciphers. Across two millennia and five countries, they meet Julius Caesar, Thomas Jefferson, Alan Turing, and others, while learning about substitution ciphers, frequency analysis, wheels, cylinders, book codes, the Verginère Table, the Enigma, and public and private keys. But will they break Dr. G’s code in time to save the science fair? A computer-based online extension that allows readers to create and decode their own secret messages is also included.

Barbara Tinker is a PhD clinical psychologist. Robert Tinker has a PhD in physics and is widely recognized as a pioneer in the field of educational technology. He and Barbara Tinker are founders of the Concord Consortium, a pioneer in using computers and other technology to enhance inquiry in science and mathematic education. They live in Amherst, Massachusetts. Penny Noyce is a doctor and the author of several books in the Galactic Academy of Science series, including The Baffling Case of the Battered Brain, The Desperate Case of the Diamond Chip, and The Vicious Case of the Viral Vaccine. She lives in Weston, Massachusetts.