Perseids Meteor Shower: How to catch a falling star…

…on your camera.  Here’s a nice shot of a meteor, from about 1AM, August 12, 2016 over the South Shore of Massachusetts: 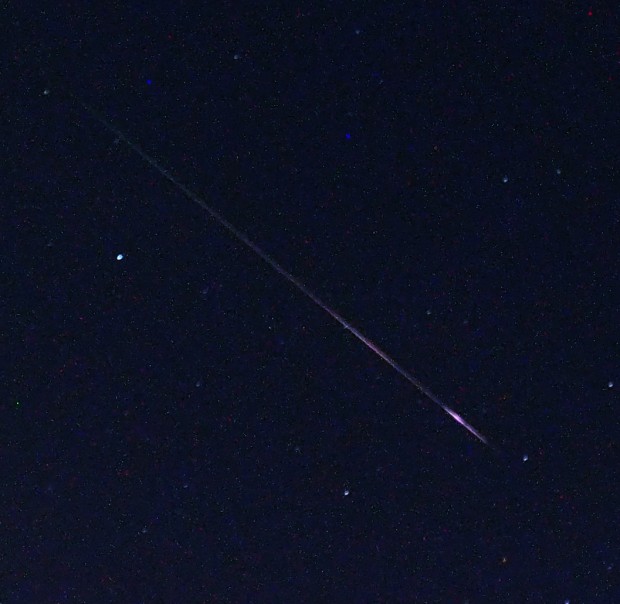 QUICK AUTHOR’S NOTE:  ALL PICS HERE, COPYRIGHT, BARNAS MONTEITH –  YOU MAY USE THESE PICS FREELY FOR EDUCATIONAL PURPOSES, WE ASK THAT YOU ATTRIBUTE TUMBLEHOME LEARNING. THANKS! (JUST CLICK ON THEM FOR HIGH RES VERSIONS)

Every year, around this time (early August), the Perseid meteors show up, sometimes in big numbers, sometimes in smaller numbers.  Well, this is one year, when the numbers were / are big!  Scientists call it an “outburst”.  Since meteor showers are typically the result of Earth passing through a space debris field, from a comet or other celestial body that passed through the area years ago, or even millenia ago, some years the fields of debris are “thicker” than others.   In the case of the Perseids, (named because they are generally seen radiating from the constellation known as Perseus = the meteor shower “radiant”) they are passing throuh the debris left behind by the prehistoric comet known as Swift-Tuttle.

The Perseid meteors travel about 132,000 mph, which is pretty fast when compared even to the International Space Station, which travels about 17,000 mph (about 8 x faster!).  And, all that speed causes meteors to burn up fairly quickly – usually before reaching 50 miles above the surface of the Earth.  And during that process of burning up in the atmosphere, they produce lots of heat and light, which we see as meteor showers… if it happens to be a clear night with few clouds, and the moon has set, and you happen to be in an area with few lights and minimal humidity.

Generally, seeing a couple of meteors with the naked eye around August 11th each year is not impossible, even in big cities (as there are plenty to see in the days just prior to, and after, the well publicized “peak” day).  I recall sitting in front of the Sun Yat Sen memorial in Taipei, Taiwan (a place with many, many lights) a few years back and clearly saw at least a half dozen or so meteors, even with all those bright tall buildings around.  Yet, even in suburban semi-rural areas far South of Boston, in the best conditions, relatively near the ocean, taking pictures of a meteor can be tricky. 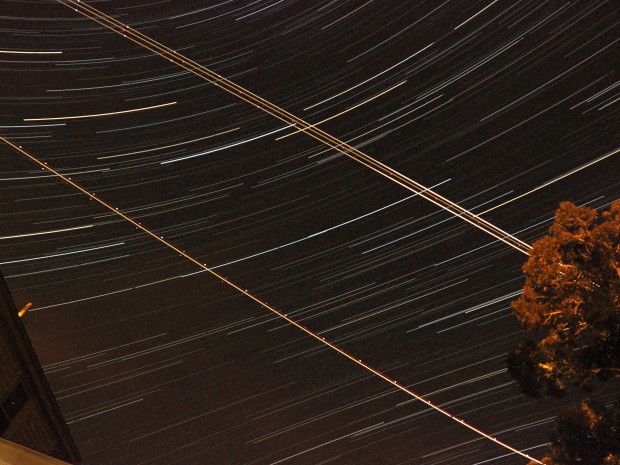 A beautiful “startrail” picture, taken on the big night of the Perseids, 2016, but the streaks you see are actually from airplanes, not meteors. It turned out the clearest part of the sky was facing South, but most meteors were in the North.  This is a composite of neary 300 pictures.

Since they move so fast, but still within an order of magnitude of the speed that ISS moves, you can generally use the same photography settings as you would for taking pictures of ISS.  I’ve detailed these in the video below.  But generally, most of the fancy pictures you see on the news stations and on major websites each year, are modified or somehow manipulated (not all, though).  In order to get a good picture of startrails (like the one above)  these days with DSLR cameras though, you really need to use a program.  They range from expensive to free, and the one I’ve been using lately is free and called Starttrails 2.3 (from startrails.de) by Achim Schaller.  It allows you to do all sorts of interesting startrails tricks, from making high resolution pure white trails to fading trails which look more like metors (even though they’re just plain old stars).  See below an example of the falling star filter: 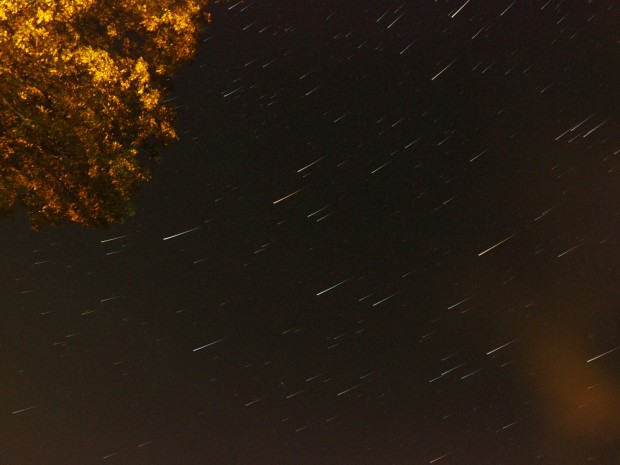 “Startrails” ouput, using the fade out / falling star option. Obviously, these aren’t real meteors/falling stars — there’s way too many! But they look cool.

Now below is an example of a typical startrail containing a few meteors, which don’t seem very bright, in the lower left/middle part of the picture: 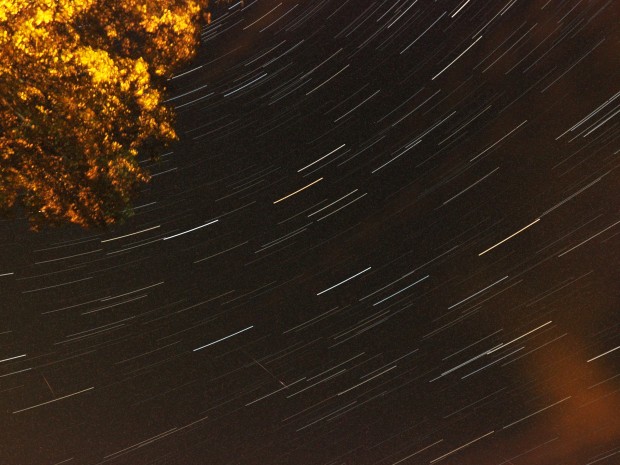 Note the light/faded orange-looking meteors in the bottomcenter and bottom lower left of this startrail image.  The bluish meteor shown above at the top of this blog is the one in the bottom center of this pic, modiied.  This was an East facing series of about 110 photos, composited.

Now see how the single images look, with 15 second exposures of the sky, of the two meteors toward the bottom of the above pic: 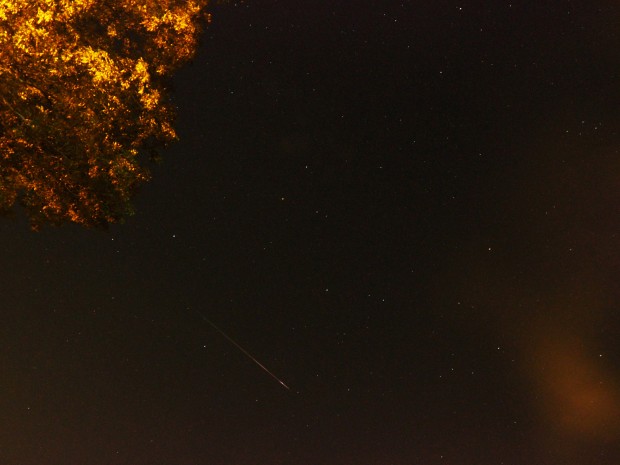 See the other meteor, which is not quite as bright but still nice – on the bottom lower left: 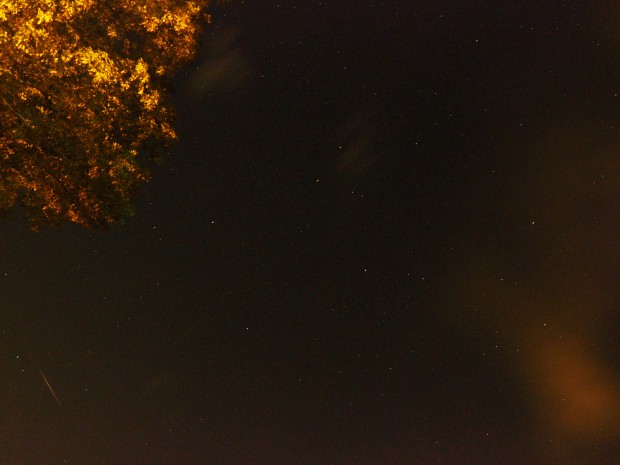 Now, if I used blue highlights on these two phots, and them re-ran them through Startrails, you’d see these two meteors very clearly (they would appear more “white” since te overall image has a reddish hue).  With some photoshop filters, and a program like Startrails, you can see that there are various ways to composite your photos and make beautiful pictures of the night sky.  Every time there is a major celestial event, these skills are very useful, if you’d like your pictures to be picked up by major science news websites, blogs and maybe even local weather reports!

See the video below, which details how to take these sorts of pictures, as well as pictures of the International Space Station / ISS:

If you’d like to teach your children more about meteors/asteroids as well as artificial space bodies, please consider looking at our book “The Secret Case of the Space Station Stowaways“, here.  Or if you have younger children, and you’d like to introduce them to the concept of constellations with a wonderful heartwarming bedtime reader, please see more about our picture book “Elizabeth’s Constellation Quilt” here.
Be Sociable, Share!