Mark Your Calendar – The Ig Nobel Prize Awards are This Thursday

The Ig Nobel Mascot: “The Stinker”
Image Courtesy The Annals of Improbable Research

Not ready for a Nobel Prize? How about an Ig® Nobel Prize instead? Created to reward “research that makes you laugh, then think,” Ig Nobels are intended to highlight unusual and imaginative research projects that are unlikely to qualify for the real Nobel but that keep the spark (and humor) in science alive. The people and the research (where applicable) are all real. Sometimes prizes are awarded because the premise may seem obvious or odd but the underlying science seems worthwhile, others are given for quackery, mismanagement, avarice or stupidity. We’ve highlighted some of our favorite winners, but the full list going back to 1991 is a great read.

Most recently, the 2012 Physics Prize went to Joseph Keller and Raymond Goldstein for “calculating the balance of forces that shape and move the hair in a human pony tail.” Inquiring minds just had to know why a ponytail swings side to side when a jogger’s head moves up and down while he/she is running. Along the same lines is the 2012 Fluid Dynamics Prize, awarded to Rouslan Krechetnikiv and Hans Myer for their research paper entitled “Walking with Coffee: Why Does it Spill?” Maybe next they can research the science of the spit-take.

Another favorite from 2012: the Anatomy Prize for Frans de Waal and Jennifer Pokorny for their discovery that chimpanzees can recognize each other individually just from looking at photos of the rear ends of their fellow chimps. That’s right, butt recognition.

The 2011 Mathematics Prize covered a lot of ground when it recognized Dorothy Martin, Pat Robertson, Elizabeth Clare Prophet, Lee Jan Rim, Credonia Mwerinde and Harold Camping, each of whom predicted that the world would end in 1954, 1982, 1990, 1992, 1999, 1994 and 2011, respectively (Camping actually predicted it twice – when it didn’t work out in 1994, he revised his prediction to 2011). Note that there is no research paper link.

Here’s one that will come in handy: the 2010 Peace Prize went to Richard Stephens, John Atkins, and Andrew Kingstong for their research proving that swearing relieves pain. According to their study, “swearing increased pain tolerance, increased heart rate and decreased perceived pain compared with not swearing.” Excellent.

The 2009 Peace Prize falls squarely in the “don’t try this at home or anywhere else” category, though. Stephan Bollinger, Stefan Ross, Lars Oesterhelweg, Michael Thali and Beat Kneubuehl conducted hands-on research to determine whether it’s preferable to be whacked on the head with a full or an empty beer bottle. A visit to the full report (with illustrations) is recommended but we’ll give you a sample: “Empty beer bottles are sturdier than full ones. However, both full and empty bottles are theoretically capable of fracturing the human neurocranium. We therefore conclude that half-litre beer bottles may indeed present formidable weapons in a physical dispute. Prohibition of these bottles is therefore justified in situations which involve risk of human conflicts.”

Think you’re good at puzzles? Move over for the slime. The 2009 Ig Noble for Cognitive Science went to Toshiyuki Nakagaki, Hiroyasu Yamada, Ryo Kobayashi, Atsushi , Akio Ishiguro, and Ágotá Tóth for discovering that slime molds can navigate a maze between two food sources. Yeah, well, try giving an amoeba a Rubik’s Cube and see how far it gets. 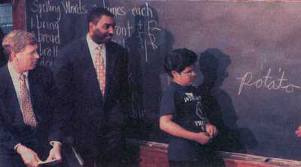 The Ig Nobel awards are organized and recipients selected by the Annals of Improbable Research magazine and presented to awardees by actual Nobel Prize winners at the Official Ig Nobel Prize Ceremony each September. This year’s ceremony is this Thursday, September 12, 2013, at Harvard’s Sanders Theatre in Cambridge, MA. Tickets are sold out but you can watch a live webcast (the webcast starts at 5:35pm EST, the ceremony is scheduled to begin at 6:00pm) to find out who won and why. We’ll post an update on Friday.