How Sweet it is: From the Fields to Your Spoon in a Day 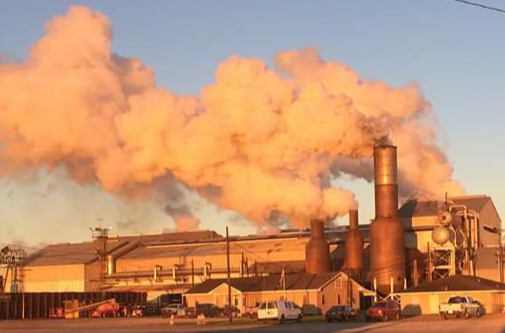 Have you ever really looked at sugar before you put it in your coffee or on your cereal? The white stuff we know as sugar is a molecule made up of carbon, hydrogen and oxygen called sucrose, found naturally in sugarcane and sugar beets.  I don’t know anything about sugar beets, but I certainly learned a great deal about the incredible process of how sugar is made from sugarcane when I recently took a tour of the Lula Sugar Factory in Belle Rose, Louisiana. I was really lucky to be visiting Louisiana when I did, because the sugar processing season there is only four months long, usually from September to December.

Sugarcane in the field

The cane is sold to the factory by farmers in the area and brought in huge trucks to the mill.  Because it’s such a short harvesting season, the process is non-stop and sugarcane is loaded onto conveyor belts 24 hours a day.  The trucks were coming in and out of the mill non-stop while I was there, and the steam was constantly wafting out of tall stacks beside the huge processing plant.

The four of us in my group met Rufus Savoie, the Purchasing and Distillery Agent for the factory.  First stop was to the office where I was outfitted with a hard hat, goggles and hearing protection. To be honest, if I knew what I was about to experience I may have sat in the car.

Pat Monteith, as she’s about to enter the factory with all the machinery that processes the sugarcane. Time to put on the safety goggles!

As we entered the warehouse, the 40’ crane nearby was a bit daunting but I quickly realized that there was more to be anxious about inside the building as we ascended the thin, expanded-metal-grating staircase to the second level and watched as water washed the cane and knives cut the stalks into shreds to prepare the cane stalks for extraction of the juice from the cane. I gingerly took out my camera, hoping it wasn’t going to fall into the hopper.

If you’ve read anything about my background as the author of Secret Case of the Space Station Stowaways, you may have learned that I had a life-long dream of working for NASA in Mission Control.  The reason why I didn’t want to become an astronaut is my claustrophobia and fear of heights.  With the several levels of open stairs where we were only protected by open metal railings and tight spaces, this building was not a place that made me feel at ease. But, I digress. 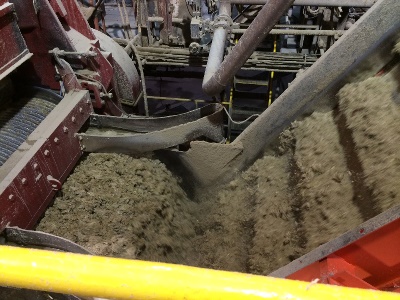 After the sugarcane is washed and shredded, heavy rollers called crushers squash the cane to extract the juice.

The heavy rollers called crushers, as well as a series of mills and diffusers, squash the cane and extract the juice.  This is not done quietly; the hearing protection barely masked the pounding and swirling sounds around us.  While the juice is strained and heated to over 210 degrees F, the woody residue called “bagasse” is taken away on conveyor belts to be used to help fuel the boilers in the factory.  Any bagasse left over can be used to make paper or plastics.  Nothing is wasted!

As we continued to ascend scarier staircases and started to sweat profusely from the rising heat near the top of the building, we saw the juice as it was transferred to clarifiers, filtered, and then moved to an evaporator which turned the juice into a thick syrup.  The syrup was then boiled, which turned the juice into molasses, and caused sugar crystals to begin forming.  A large open tank called a “crystallizer” was then used to stir the crystals while cooling.  Looking through the glass windows at this process reminded me of watching pictures of geomagnetic storms on the sun. 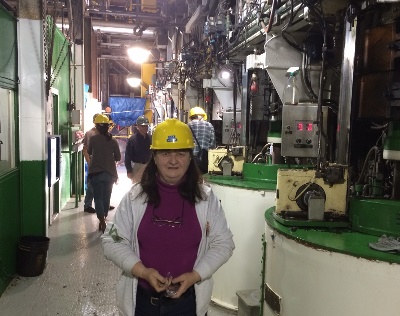 I’m standing next to two of the nearly dozen centrifuges used to separate the sugar crystals from the molasses.

The final part of the tour was pretty neat since I had a good understanding of the science behind what was happening. One of the chapters in my Space Station Stowaways book was about centrifuges – enclosed machines that rotate rapidly, as when an astronaut-in-training is subjected to “G-force,” simulating the high gravitational force experienced during launch of a spacecraft.  While the process is similar, the spinning force in the sugar factory is used to separate the sugar from the molasses.  The crystals that remain are known as “raw” sugar or “Turbinado,” which is a natural light golden color – a result of the molasses from the sugarcane.  The sugar you use in your drinks and on your food every day gets it white color after it’s been shipped in bulk to refineries for processing.

It takes about 12 hours for a stalk of cane to make it from one end of the process through to the end.  A really enormous facility, the Lula Sugar Factory grinds 12,000 tons of cane a day and produces 2.5 to 3 million pounds of sugar a day. The processing in this factory has been used as a model for most of the other sugar mills around the world.  You can learn more about the Lula Sugar factory, their equipment and sugarcane processing at http://www.luwest.com. 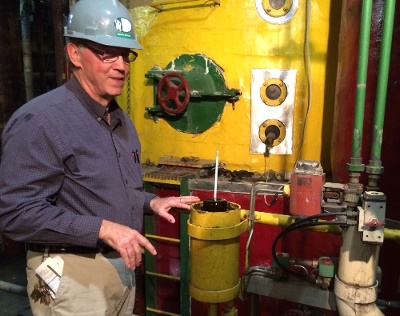 Rufus Savoie, our tour guide, made the end of our tour really “sweet” as we got to taste the molasses and other products that come from the factory!