One of the greatest challenges to mankind always has been eradicating the presence of debilitating disease. Until just thirty years ago poliomyelitis occurred in the United States and throughout the world in epidemic proportions, striking tens of thousands and killing thousands in our own country each year. Dr. Jonas E. Salk changed all that. This year we observe the 30th anniversary of the licensing and manufacturing of the vaccine discovered by this great American. Even before another successful vaccine was discovered, Dr. Salk’s discovery had reduced polio and its effects by 97 percent. Today, polio is not a familiar disease to younger Americans, and many have difficulty appreciating the magnitude of the disorder that the Salk vaccine virtually wiped from the face of the Earth. 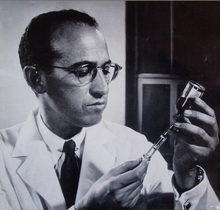 Right around the time Jonas Salk was born in New York City in 1914, polio was gaining a foothold as one of the first great epidemics of the 20th century. In 1916, there were 27,000 documented cases of the virus, which frequently causes irreversible paralysis even in its early stages. The child of Russian-Jewish immigrants, Salk set out to study law at The City College of New York but was soon drawn to science and went on to study at the New York University School of Medicine. At that time, most medical school students went on to become clinical practitioners– it was considered unusual at that time for a doctor to be interested in pursuing research as Salk was.

In 1964 Salk opened the Salk Institute for Biological Studies, which continues to conduct research focusing on Molecular Biology and Genetics, Neurosciences and Plant Biology. Salk himself went on to do research on cancer, multiple sclerosis and AIDS.

Now vaccines are in the news more than ever, with scientists working feverishly to develop a new vaccine for Ebola, which, frightening as it is affects a small number of people. Meanwhile parents who should know better are failing to vaccinate their children for known, widespread threats like polio, measles and whooping cough. We can only imagine what Dr. Salk would think, and can be grateful that the science he pioneered is making the world safer and healthier today.

Jonas Salk considered himself a “biophilospher,” which he defined as:

Someone who draws upon the scriptures of nature, recognizing that we are the product of the process of evolution, and understands that we have become the process itself, through the emergence and evolution of our consciousness, our awareness, our capacity to imagine and anticipate the future, and to choose from among alternatives.