Happy (Belated) 157th Birthday to Nikola Tesla, One of the Greatest Inventors

We could use up this whole post with simple list of all the things in your house that are the direct result of inventions of Nikola Tesla. Turn on a light, pick up a remote, answer a phone – all of those acts can be traced to his work. Many of the ideas he pioneered were implemented or co-opted (some might say stolen) by other inventors and businessmen of his day, but most agree it was Tesla who set the stage for modern power electronics, communications, x-ray technology and robotics.

Born on July 10, 1856, to Serbian parents in what is now known as Croatia, Nikola Tesla was always interested in science. His mother was an inventor of electrical appliances (an electric egg beater among them) and Tesla credited her for all of his inventive talents. Still, he was naturally gifted in math and science – his teachers thought he was cheating when he was able to solve calculus problems in his head. Resisting his father’s wish that he enter the priesthood, Tesla studied electrical engineering and  worked in power companies in Strasbourg and Paris before going to America in 1884. With only four cents and a letter of introduction in his pocket, Tesla arrived in the U.S. with the goal of working for Thomas Edison, who on the basis of that letter and his ideas, hired him on the spot. The letter from an Edison colleague, Charles Batchelor, read:

“My Dear Edison: I know two great men and you are one of them. The other is this young man!” 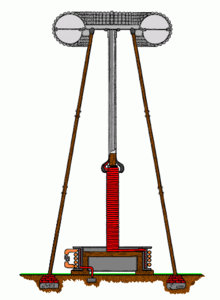 Tesla’s alternating current (AC) power improved Edison’s electric power systems, but the relationship soured when Edison refused to come through with the $50,000 Edison promised Tesla for his work. Tesla dug ditches to make ends meet before finally securing financing for his own company. Real financial success came, though, through his eventual partnership with George Westinghouse (a businessman and fellow inventor who invented railroad air brakes), to whom he sold his patents in the areas of polyphase AC motors and power transmission. At the 1893 Columbian Exposition Tesla’s brilliant light displays showed the world that AC was the power of the future. Next, Tesla and Westinghouse set out to fulfill Tesla’s longtime dream of harnessing the hydroelectric power of Niagara Falls. The project was plagued by investor problems and patent challenges, but power flowed at last in November of 1896.

Tesla’s competition with other inventors and patent troubles continued as he pursued wireless technology, when Guglielmo Marconi used 17 of Tesla’s patent to beat him to the punch with the first transatlantic radio transmission from Cape Cod in 1901. Satisfied at that time to be holding the patents, Tesla was devastated to learn later that the U.S. Patent Office reversed its decision (for reasons that still remain unclear) and awarded Marconi the patent for the invention of radio. The final insult was Marconi winning the 1911 Nobel Prize. Tesla’s right to his patents was restored by the Supreme Court after his death, but the indignities surrounding stolen patents and bad business deals left him impoverished in in his final years.

With over 100 patents to his name and his name attached to one of the world’s most innovative electric cars, Tesla’s influence remains strong today as his vision and inventions continue to take us into the future.