The GALACTIC ACADEMY OF SCIENCE is Tumblehome Learning’s keynote series. 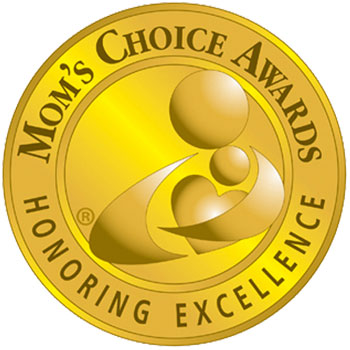 GAS is designed to stimulate general interest in science & engineering and to encourage student participation in inquiry based STEM competitions through engagement in a fun and exciting adventure, mystery, CSI mission or other storyline embedded with both scientific content knowledge and methods. [STEM is Science, Technology, Engineering & Math].

Each book of the series follows a model, with different subject matter and storylines, and some different characters along the way.   All GAS books feature a group of middle school children (usually a boy & girl pair) from diverse backgrounds, facing an impending science fair project or other school or personal challenge.   Suddenly, the kids are faced with a perfidious present-day crime that needs historical knowledge of science or engineering to solve it.  Under the guidance of a Dude or Dudette from the Future (pictured above, Quarkum Phonon and Selectra Volt), the kids use a special device to travel through time and visit pivotal scientists of the past, gain key knowledge, solve the crime, ace the science/engineering/math competition, and become inducted into the GALACTIC ACADEMY OF SCIENCE, or GAS. 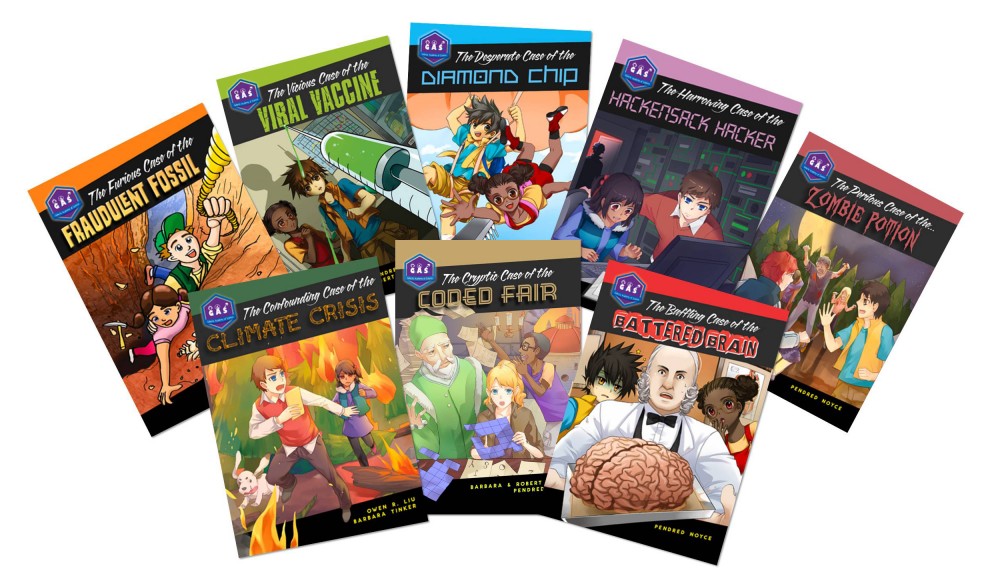 Each book has a corresponding kit, activity and/or game/software package that supplements the storyline and subject matter of the book. The following are some of the subjects covered by the initial GAS books in our ongoing series:

- stratigraphy (the study of rock layers and deposition), comparative biology, basic paleontology concepts, evolution, and geologic history of the Earth

– basics of computing, programming, software architecture, how networks and the Internet work

• Our materials encourage curiosity for science & engineering knowledge, as well as understanding of the methodologies to solve problems, and a historical context behind some of the most important discoveries which have been useful for mankind, and which point to the next advances in science.  We strive to align our curriculum with national and state curriculum standards, such as Common Core, and we work to make sure that our materials are ahead of future standards, such as the Next Generation Science Standards.  We like to think that our materials are right at the intersection of science & engineering literacy and fun!  Read more about our alignment with state and national curriculum here. 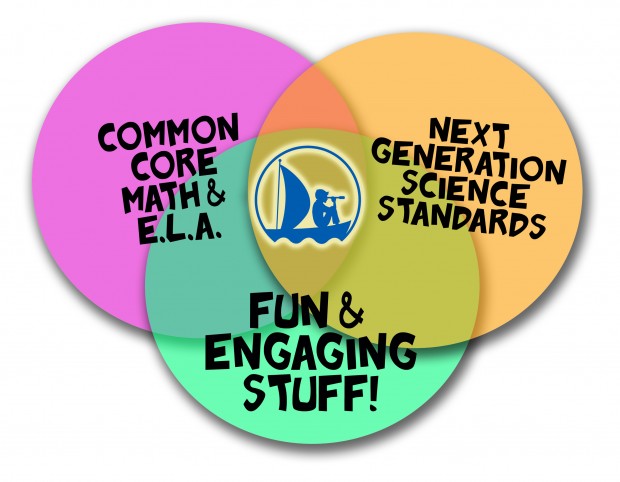 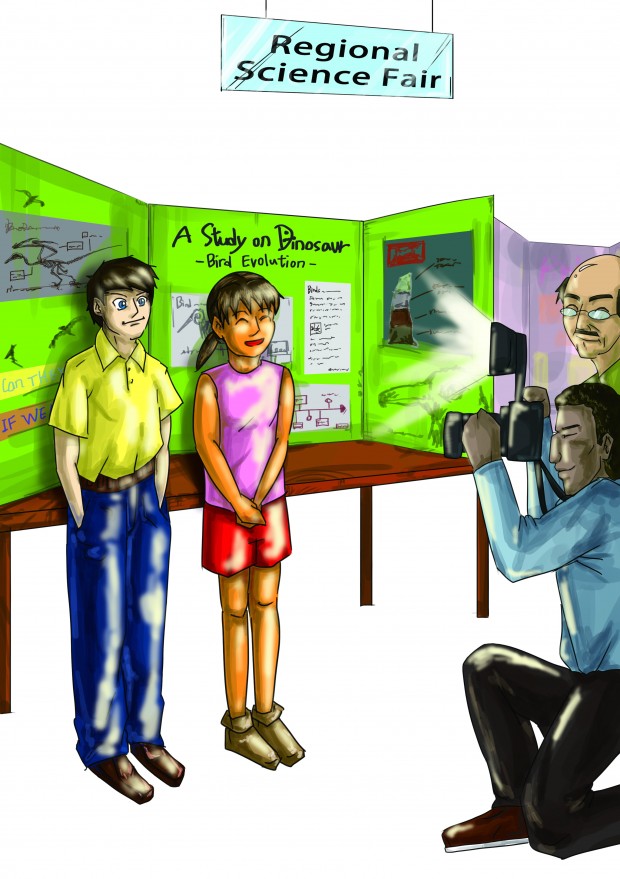 • Methods of science and engineering: Each scientist the kids visit adds to their repertoire of and understanding of research approaches, including classification, prediction, comparison, field work, controlled studies, public debate and more.
• Integrity & ethics  As our slogan implies, “defending the integrity of science throughout the ages,” we stress that one should never cheat in science, either for fame or greed (read our blog post about some field research we did involving Integrity and the GAS Series here).
• Unconventional and lesser known historical figures who changed science You might have heard of the late Steve Jobs, founder of Apple, but do you know who his mentor was?  Meet Robert Noyce, the founder of Intel, and inventor of the silicon semiconductor, which made Apple and all of SIlicon Valley possible in the Desperate Case of the Diamond Chip.
• Focus on the fact that young people can make a difference: Did you know that an 11 year old girl in early 19th Century England discovered some of the first sea reptiles, and came up with the theory of evolution before Charles Darwin?  Meet Mary Anning in the Furious Case of the Fraudulent Fossil.
• Fantasy, mystery, CSI, adventure and other storylines to appeal to nearly every taste We incorporate concepts and storylines from popular movies, games and other forms of mass media, which have proven to be interesting to kids; we incorporate our science & history lessons within that context so the stories remain fun & engaging).
• Historical context – At least five real scientists & engineers are featured in each book, along with a glimpse into their personal lives (see a full list below).
• Teamwork  - Pairs of students work through their GAS mystery with each other, as well as teachers, friends, historical scientists & engineers and their assigned Dude or Dudette from the future.  Through this process, children learn to evaluate their strengths and weaknesses, embrace cultural and other differences, and work through problems together.
• Acceptance of learning disabilities & encouraging perseverance  - Covering topics from illness to autism to wearing glasses or just feeling a bit nerdy or socially awkward, the GAS series encourages tolerance and the importance of striving to overcome weakness, disability or any other obstacle.

“The first four books of the Galactic Academy of Science series blend elements of science fiction, time-travel, and mystery into fast-paced novels ideal for young people ages 9-13. Pendred Noyce’s “The Desperate Case of the Diamond Chip” (9780985000806) sends young Mae and Clinton on a time-traveling trip to teach them more about how science and electronics work – when they’re not dodging the gestapo or skydiving from a plane! Barnas Monteith’s “The Furious Case of the Fraudulent Fossil” (9780985000851) takes Benson and Anita on a museum visit, which spirals into a series of adventures from confronting Chinese imperial soldiers to exploring the harsh landscape of the American West. Pendred Noyce & Roberta Baxter’s “The Vicious Case of the Viral Vaccine” (9780985000875) has Mae and Clinton witness humanity’s historic battles against lethal diseases such as smallpox, rabies, polio, as well as the pioneering work of people like Louis Pasteur, Jonas Salk, Maurice Hilleman and more to make the world a healthier place. In Barnas Monteith & Roberta Baxter’s “The Harrowing Case of the Hackensack Hacker” (9780985000882), Anita and Benson must work together to save not only the Galactic Academy of Science, but also the Earth from a rampaging computer virus! Peppered with occasional color illustrations, all four books strive to educate as well as entertain, and are excellent addition to public, middle school, and junior high school library collections.” — Midwest Book Review 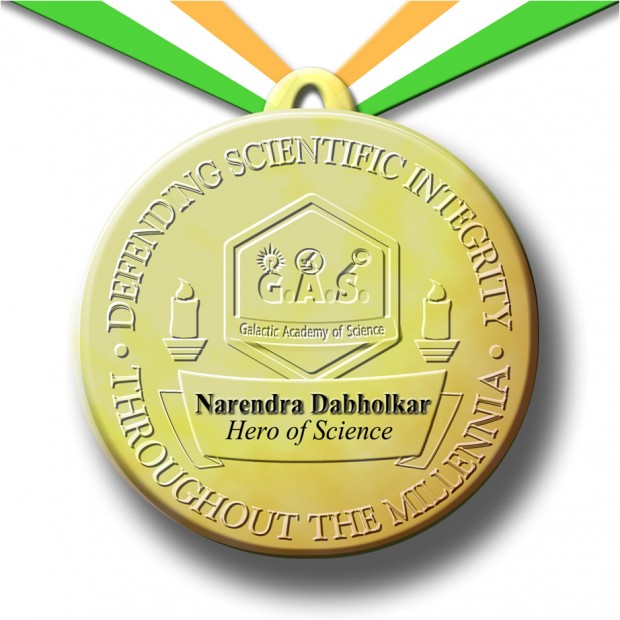 With our core GAS Series, and with THL publications in general, we encourage the recognition of those scientists, engineers, mathematicians – and even students – who do great scientific deeds and/or try their best to preserve scientific integrity.