Diana Nyad Overcame the Jellies in her Epic Swim – Can You Master THL’s Jellyfish Quiz? 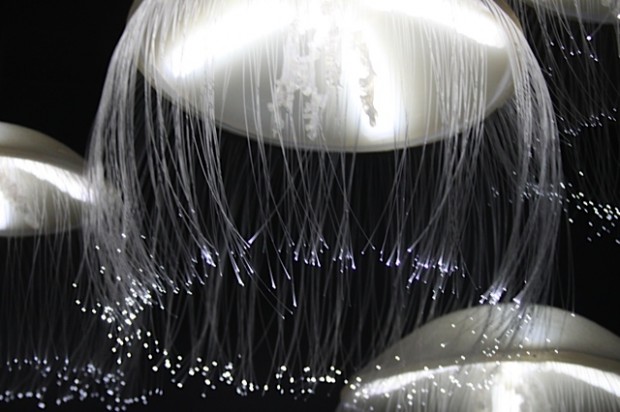 Diana Nyad wasn’t about to be thwarted again by box jellyfish on her record-breaking swim from Cuba to Key West, FL. She wore a special mask and slathered her body in protective anti-jellyfish cream to protect her from stings as she swam 110.4 miles over about 53 hours. We decided to use this as a chance to learn more about jellies, and we found so much great information we put together a quiz.

1. Box jellyfish are a sophisticated species of jellyfish with a particularly potent sting that can cause paralysis or death. What is another name they are known by?

2. What do you call a group of jellyfish?

3. How do jellyfish breathe?

4. True or False? Jellyfish live only in salt water.

6. True or false? Some jellyfish are thought to be immortal – they never die.

7. Why are jellyfish populations increasing off the coast of Antarctica, Alaska, Spain and Western Africa?

8. What is the most common predator of jellyfish?

9. True or false? If a jellyfish stings you, urinating on the sting takes away the pain.

10. What jellyfish feature led to a Nobel Prize?

Match the fact in the first list to the corresponding number in the second list (special thank to the National Science Foundation for this great data):

1. C. Sea wasps. Unlike many other jellyfish, box jellyfish have eyes (4 of them, one on each “side”) and other visual detectors call ocelli that can detect light. These, along with a very simple brain, allow box jellies to actually hunt their prey rather than float randomly into their food source. Depending on the specific subspecies, the box jellyfish sting can cause discomfort that is short term and mild, long and painful, or fatal. For Nyad, the box jelly stings on her previous swims were painful and paralyzing enough to force her to cut short her long term swim.

Most jellyfish have three layers: the outer layer (epidermis), the middle layer (mesoglea) that is its trademark thick, elastic, jelly-like substance; and the inner layer (gastrodermis). They have a simple nervous system (nerve net) that can smell, detect light, and respond to other stimuli.

3. C. The oxygen in seawater diffused directly through the skin. Jellies are very simple creatures – they don’t have lungs, hearts or brains, but they do have a have a lone digestive cavity that serves as both stomach and intestine, with a single opening for food and excrement travel through.

4. False. Called Craspedacusta sowerbii, freshwater jellies have been spotted in North and South America, including almost every state in the U.S. Alabama, New Hampshire, and Missouri have online resources that can help you spot them locally.

5. D. After her painful run-in with box jellies, Yanagihara wanted answers. She explains, “The fiery pain and days-long agony got my full attention. As a biochemist, I was completely intrigued, but as a sting victim, it was personal. I needed to know more.” Often personal experience leads to valuable research!

6. True. At least one species of jellyfish, Turritopsis dohrnii, is currently being studied because it appears to have the ability to reverse the aging process and regenerate itself indefinitely. At any point in its life, it can turn itself back into a polyp, the earliest stage of jellyfish life. This ability to throw itself into reverse led scientists to nickname it the “Benjamin Button” jellyfish. Scientists have also explained it as being akin to a butterfly that, rather than dying, turns itself back into a caterpillar.

7. C. Fish eat jellies, and fewer fish means more jellies in the water, so overfishing is a serious problem. Also, fewer fish means that there is less competition for their primary source of nourishment, zooplankton, so jellies reproduce faster with the increased availability of food. Also, jellies are not picky eaters and so thrive in waters where pollution has killed off other sea life.

8. D. Other jellies are most likely to eat their fellow jellyfish, but all of the others on the list eat them as well (and sharks eat them, too). Seabirds sometimes ingest jellies when they are attached to crustaceans floating near the surface of the water.

9. False.  Although urine for jellyfish stings is a popular folk remedy, it may actually make things worse, as does rinsing in fresh water. Jellyfish tentacles have millions of stinging cells in them called nematocysts that pierce the skin and inject venom when the tentacles touch you. Some experts say a good way to deactivate the nematocysts is remove any tentacles from your skin (don’t use your bare hands), and treat the wound with something acidic, like vinegar. After that, scrape off any remaining jellyfish matter with something flat and dull, like a credit card.

10. In 2008, Shimomura, Chalfie and Tsien won the Nobel Prize in Chemistry for their work with GFP, a fluorescent tag first extracted from jellyfish that allows scientists to “light up” the tissue that expresses a certain gene.