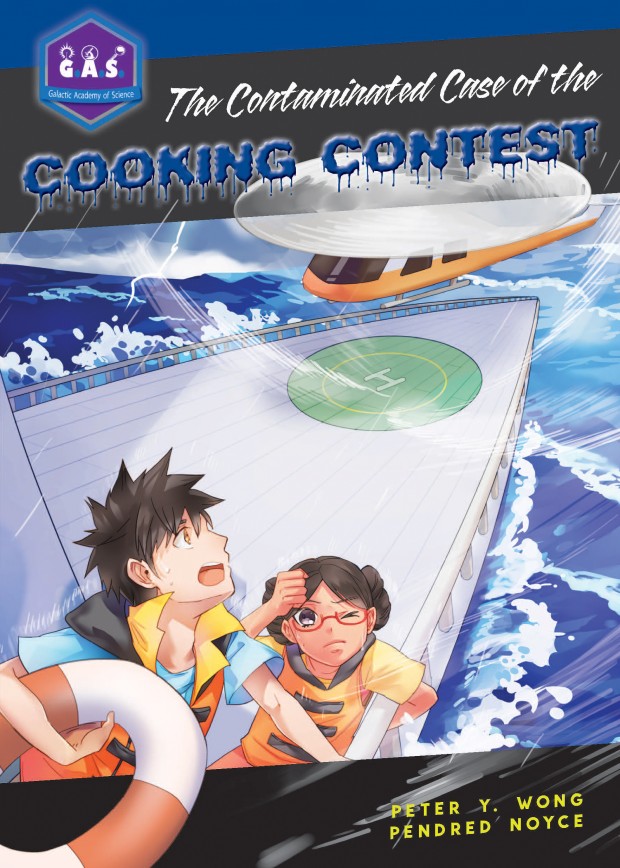 In The Contaminated Case of the Cooking Contest, the next installment in the Galactic Academy of Science (G.A.S.) series, Mae and Clinton are aboard a cruise when a cooking contest turns into a disaster of vomiting passengers. To solve the mystery and discover the cause of the outbreak, these 7th graders travel through time to learn about the science of food safety.

Here is a quiz to test YOUR knowledge of food safety:

1. Which book and its strong public response led to the passage of the Meat Inspection Act and the Pure Food and Drug Act?

A. Silent Spring by Rachel Carson
B. The Jungle by Upton Sinclair
C. The Omnivore’s Dilemma by Michael Pollan
D. Green Eggs and Ham by Dr. Seuss

2. Fish and shellfish concentrate mercury in their bodies, often in the form of methylmercury, a highly toxic organic compound of mercury which is why you must eat some fish in moderation — only a few times a month. Rank these fish from low risk to high risk of mercury:

3. According to ERS, how much total food did Americans consume in 2009?

A. 654 billion pounds
B. 296 billion kilograms
C. 10.5 trillion ounces
D. Ha! Those are all the same amount just different metrics!

4. Fill in the blanks. It’s estimated that each year U.S. farmers lose ____ percent of their crops to pests and another ___ percent to diseases which totals to a 24% loss.

5. Why is consuming unpasturized, or raw, milk bad for you?

A. It contains Salmonella, E. coli and Listeria
B. The milk curdles and becomes cheese-like
C. It’s not bad for you it’s natural and organic!!!!

6. Why is Bovine spongiform encephalopathy commonly referred to as “Mad Cow disease”?

A. It is named after the “Mad King” Aerys II Targaryen of the Seven Kingdoms.
B. The disease affected cow’s nervous system, causing them to act strangely and lose control of its ability to do normal things, such as walk.
C. When one is infected with the disease, they uncontrollably moo like a cow. 1. B. The Jungle by Upton Sinclair. This 1906 novel also exposed the inhumane work conditions of immigrant workers in the food and meat-packing industry.

3. D. Ha! Those are all the same amount just different metrics!

5. A. It contains Salmonella, E. coli and Listeria. However, there is an illegal, underground trade of raw milk that has gained popularity in recent years for proponents of the taste, organicness, and supposed benefits of unpasteurized milk regardless of the risks.

6. B. The disease affected cow’s nervous system, causing them to act strangely and lose control of its ability to do normal things, such as walk. The infectious agent in BSE is believed to be a specific type of misfolded protein called a prion. In the brain, these proteins cause native cellular prion protein to deform into the infectious state, which then goes on to deform further prion protein in an exponential cascade. This results in protein aggregates, which then form dense plaque fibers leading to the microscopic appearance of “holes” in the brain, degeneration of physical and mental abilities, and ultimately death. Prions are not destroyed even if the beef or material containing them is cooked or heat-treated, which then can be transmitted to humans through consumption.