Backyard Wildlife: when the snow is deep should we feed the local animals? 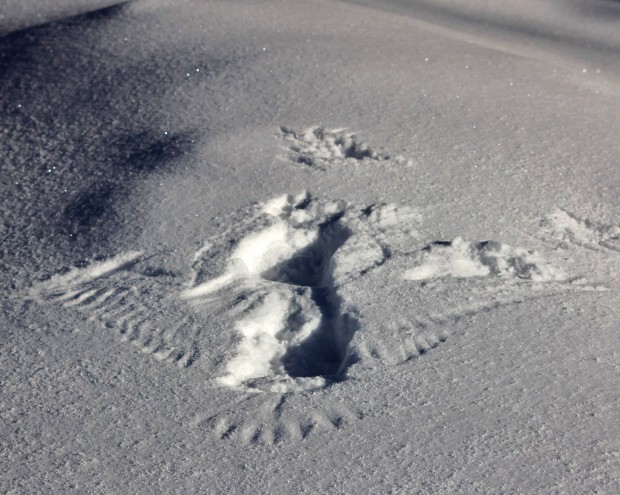 An eagle isn’t a backyard animal, but it leaves a pretty impressive print in the snow when it hunts!

When there are snowstorms on the horizon, many of us rush out to buy bread milk and eggs. What do the animals that aren’t hibernating eat when the snow piles up? Do they need our help?

Bird feeders are fun to put up in winter – we can stay inside where it is warm and watch them come and go (if the squirrels don’t get there first). But do they really need the seeds we put out for them? The answer, for the most part, is that the birds and other animals in our local habitats don’t need us to keep them alive in winter.  The caveat regarding birds is that there aren’t, at this point, any comprehensive studies that show what the impact of feeding birds has on natural selection of the dominance of one species of bird over others. It is also a myth that local birds become dependent on feeders and if you start feeding them in the fall and then don’t fill your feeder birds will starve. Birds will not die if you don’t fill your feeder.

What made these prints?

As for other winter climate animals, here’s how they fare in the cold and snowy months:

Foxes will eat almost anything, and they dig in the snow to find rodents and will stalk birds (and squirrels) at the feeder. Like raccoons, foxes that live among humans will feast on garbage, so keep trashcan lids on and garage doors closed.

When they are not raiding bird feeders, gray squirrels will travel to the various locations where they hid nuts curing the fall. Often during the warm weather you will see a squirrel lick, nibble on and rub a nut against its face – this is its way of releasing the scent of the nut so that the squirrel will be better able to find the nut in winter – it can even smell it when it is buried in the snow.

Because gray squirrels sometimes lose the scent or forget where they’ve buried food in the ground (they bury a few in many locations), they are also inadvertently planting trees. Red squirrels, however, store nuts in greater quantities and those stockpiles tend to dry out and not take root. While squirrels will eat birds eggs and insects and even animal carcasses if food is scarce, they don’t eat trees – if you see a squirrel gnawing on a tree branch in winter, it’s just sharpening its teeth (like beavers, their teeth grow continuously).

Speaking of beavers, they do stay beneath the surface all winter but they don’t hibernate. They stockpile sticks underwater during the warms months and leave their lodge only to swim under the ice to fetch the food they’ve set aside. There’s nothing you can do to feed beavers in winter.

In very cold areas with lots of snow, deer congregate in deer wintering areas, or “deer yards.” Deer yards are areas in small valleys or near waterways where hills, riverbanks and tall evergreens protect them from wind and heavy snow. Staying together as a group also allows deer to make trails in deep snow so that precious winter fat and energy are not used unnecessarily in breaking trails as they look for food. Deer will eat any foliage that remains exposed in winter, including pine needles and tree bark. They are especially fond of honeysuckle bushes. Wildlife experts discourage feeding deer in winter because it upsets the natural balance of the herd and people often try to feed them hay, which they cannot digest.

Fishers pursue the same diet of small animals year-round, but in winter they can be scavengers and will feed on large animals like deer and elk that have died from exposure or other causes (called “winter kill”).

Deep snow is particularly tough on wild turkeys because they rely on exposed ground for most of the plants and bugs they feed on. Studies show, however, that even the harshest winters don’t seem to affect the turkey population for more than a single season – if there is die-off from an especially snowy winter the population tens to recover the following year. For this reason experts discourage supplemental feeding of turkeys in winter because, like deer, it tends to throw off the balance of the populations and also they’ve found most of the additional feed seems to be still on the ground when spring arrives.